- October 02, 2019
The recently-launched James R. Thompson Center Historical Society made a unique entreaty to Chicagoans this week. The group --composed of an architect, real estate reporter and architectural historian in the city-- encouraged Chicagoans to "visit the building and contribute to the ongoing discussion of the past, present and future in Chicago," according to this story from the Sun-Times' Tina Sfondeles.

This reminded me of the recent Twitterverse suggestions about turning it into a hotel, which seemed like a feasible idea for this unique Helmut Jahn building.

Of course, doing so would bring the location back to its roots, since the legendary Hotel Sherman/Sherman House occupied this space in one way or another from 1837 to 1973.

The last iteration of the Hotel Sherman, designed by the ubiquitous Chicago architectural firm Holabird & Roche, opened in 1911, and at its peak had over 1,600 rooms. I'm sure you could squeeze in 1,600 rooms in a reconverted Thompson Center, carving up the office space in the 17-floor structure to create sort of an upscale Embassy Suites atmosphere, where the rooms look down on the majestic skylit atrium.

Both the Hotel Sherman and the Thompson Center share a political background as well. The Thompson Center has been home to thousands of state of Illinois employees since it opened in May 1985. The Hotel Sherman was for years the home to the Cook County Democratic Party, a fact which was prominent in the Chicago Tribune stories about its closing back in 1973. Note the proposed 28-story glass-and-steel replacement hotel for the Sherman House: 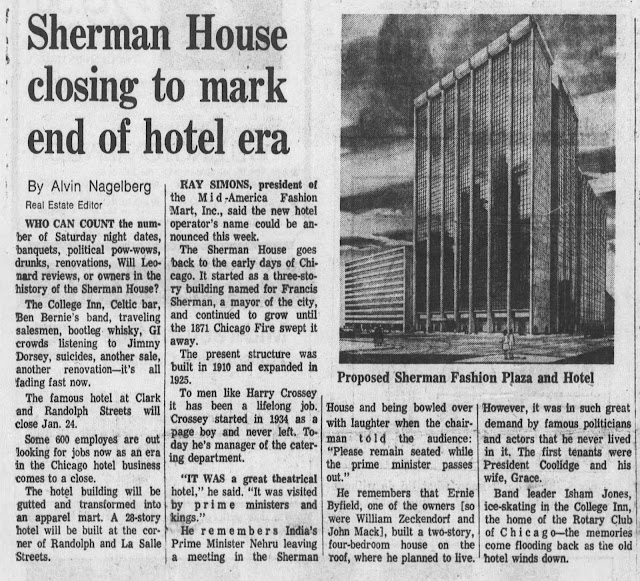 In addition to being a political home for Cook County Dems, the Hotel Sherman was also the home of the famous 1926 gangland summit, which resulted in a truce between the Al Capone and Bugs Moran gangs. It became known as the Hotel Sherman Treaty, although contemporary accounts didn't mention the location of the summit, perhaps for safety concerns: 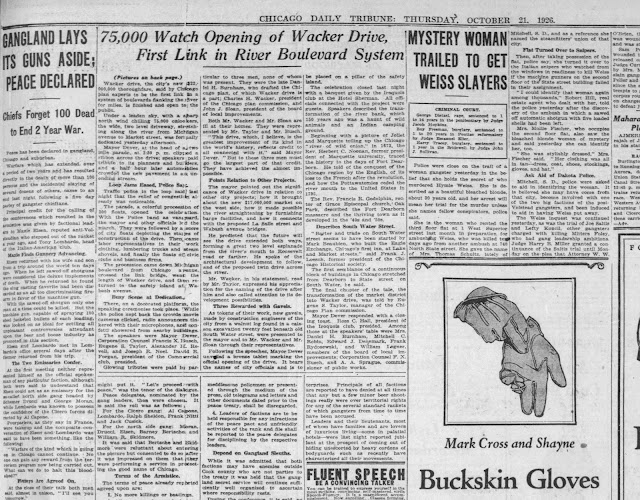 As you can see from the Chicago Tribune clip above, the Hotel Sherman summit occured on the same day that Wacker Drive opened.

The Hotel Sherman was also known for featuring big bands. The great Duke Ellington had extended residencies there in 1940 and 1942 with perhaps his greatest orchestra, the so-called Blanton-Webster band (named after bassist Jimmy Blanton and tenor saxophonist Ben Webster). The hotel was the subject of three songs authored by Duke between 1940 and 1942.

Then there was "Pitter Panther Patter", the landmark bass-piano duet with legendary bassist Jimmy Blanton, named after the Hotel Sherman's Panther Room, where Duke appeared in 1940:

Finally, there was the Latin-tinged "The Flaming Sword" from 1940, which refers to the Flaming Sword kabobs that waiters would serve in the Panther Room:

Here's an ad for those "Flaming Sword" dinners at the Hotel Sherman: 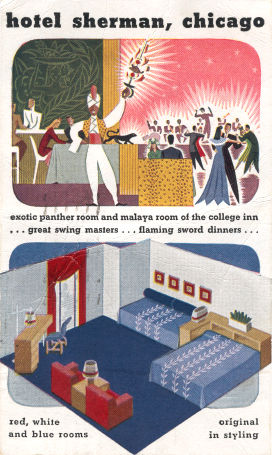 Below, I created a split image of the Hotel Sherman/Thompson Center location in 1936 and in 2019, by using the wonderful Northwestern University Knight Lab Juxtapose tool. Use the center sliding bar to reveal the image from either period: