Showing posts from August, 2019
Show all

Sister Jean Dolores Schmidt, who celebrated her 100th birthday yesterday, became an international phenomenon during Loyola University-Chicago's historic NCAA basketball tournament run in 2018, which ended with the Ramblers' improbable appearance in the Final Four. But Sister Jean's first major media profile was five years before that, in the March 5, 2013 edition of the Chicago Tribune, in print and online. The Trib's outstanding higher education reporter, Jodi Cohen (now with Pro Publica) wrote the story. And the Tribune's great photographer, Brian Cassella, shot photos and video. I produced a short video with Brian for chicagotribune.com, which was part of a multimedia package online. Unfortunately, the Tribune doesn't really maintain an archive of its online multimedia packages prior to, say, 2016. That's too bad, because there was some compelling multimedia work between around 2005 and 2016, which is lost to time. Anyway, enjoy this cobbled-togeth
Post a Comment
Read more 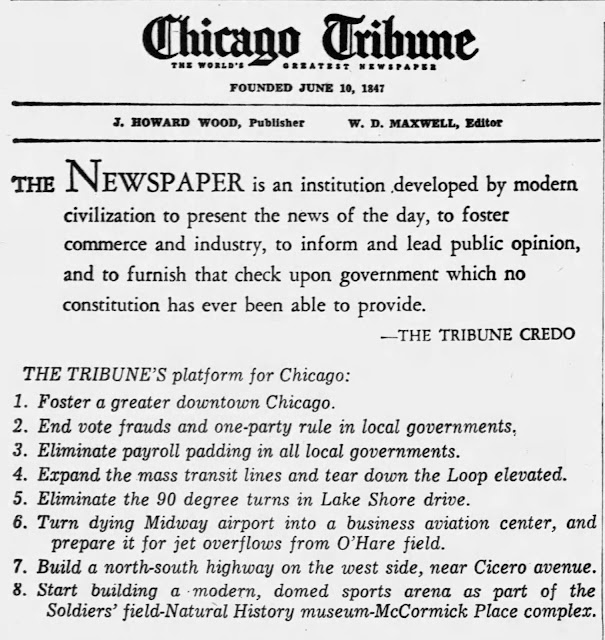 In the early 1960s, the Chicago Tribune’s editorial page would routinely provide its “platform” for the city underneath the newspaper’s masthead. The "platform" was a list of infrastructure improvements and political reforms. This clip from March 29, 1964 lists eight goals for the city: As you can see, the board totally whiffed on some of these ideas. Can you imagine the Loop without the elevated trains? That was the Tribune’s proposal, while at the same time expanding mass transit lines. I assume that the mass transit expansion would involve the new “L” lines in the middle of the new expressways being built in the city in the ‘60s: the Dan Ryan and the Kennedy (the Congress line had already opened in the median of the Eisenhower Expressway in 1958, the world’s first such public transit rail line to be located in the middle of a multi-lane highway). The editorial board was also actively pushing for a West Side highway, better known as the “Crosstown Expres
Post a Comment
Read more 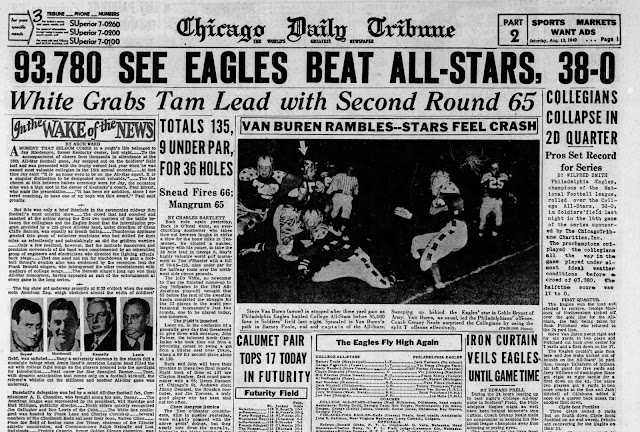 Here’s the headline on page 1 of the Chicago Tribune from 70 years ago today. It was front-page coverage of the long-defunct Chicago Charities College All-Star Game, which pitted the NFL champion from the previous year (in this case, the Philadelphia Eagles) against a team of star college football seniors from the prior year: Check out that attendance – over 93,000 fans at a then-mammoth Soldier Field, 21 years before the lakefront stadium was reconfigured and made smaller in order to accommodate the Bears, who moved to Soldier Field in 1971, after spending the previous 50 years playing in Wrigley Field. Believe it or not, that was a drop from attendance for the game in the two previous years, when the game drew over 100,000 fans. The 1947 and 1948 games had additional local appeal, since the NFL champs playing the game were the Chicago Bears and Chicago Cardinals, respectively. The preseason game was staged annually in August from 1934 to 1976 at Soldier Field, exc
Post a Comment
Read more

Duke Ellington Orchestra at Chicago's Bud Billiken Parade in 1934 (Chicago Public Library/Vivian Harsh Collection) Duke Ellington loved Chicago. He first performed in the city at the Savoy Ballroom in 1930 and made his last Chicago appearance at Mr. Kelly's in 1973. Between that time, his orchestra played in the city hundreds of times, at places like the Joseph Urban Room in the Congress Hotel, the Panther Room at the Hotel Sherman, the Regal Theatre, the State-Lake Theatre, the Hotel Stevens, the Oriental Theatre, the Holiday Ballroom, the Chicago Theatre and, of course, the Blue Note -- one of Ellington's favorite all-time performing venues. In his 1973 memoir, "Music Is My Mistress", he praised the city. "Chicago always sounded like the most glamorous place in the world to me when I heard the guys in Frank Holliday's poolroom talking about their travels," he wrote. "By the time I got there in 1930, it glittered even more. . . . C
Post a Comment
Read more