But Sister Jean's first major media profile was five years before that, in the March 5, 2013 edition of the Chicago Tribune, in print and online. The Trib's outstanding higher education reporter, Jodi Cohen (now with Pro Publica) wrote the story. And the Tribune's great photographer, Brian Cassella, shot photos and video. I produced a short video with Brian for chicagotribune.com, which was part of a multimedia package online.

Unfortunately, the Tribune doesn't really maintain an archive of its online multimedia packages prior to, say, 2016. That's too bad, because there was some compelling multimedia work between around 2005 and 2016, which is lost to time. 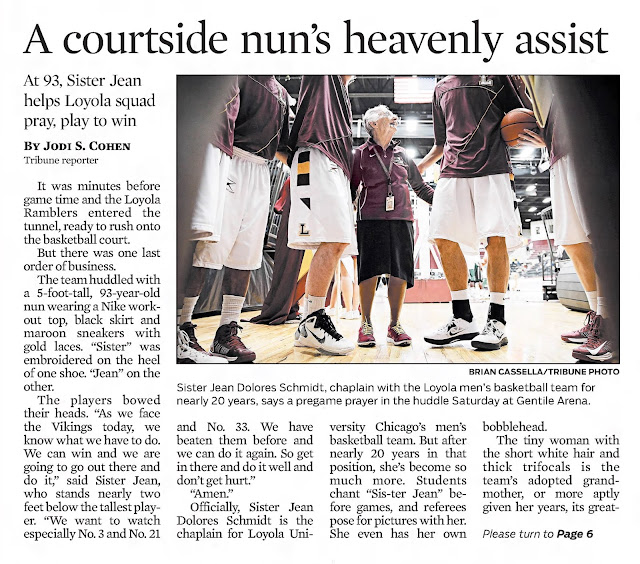 Duke Ellington loved Chicago.
He first performed in the city at the Savoy Ballroom in 1930 and made his last Chicago appearance at Mr. Kelly's in 1973. Between that time, his orchestra played in the city hundreds of times, at places like the Joseph Urban Room in the Congress Hotel, the Panther Room at the Hotel Sherman, the Regal Theatre, the State-Lake Theatre, the Hotel Stevens, the Oriental Theatre, the Holiday Ballroom, the Chicago Theatre and, of course, the Blue Note -- one of Ellington's favorite all-time performing venues.

"Chicago always sounded like the most glamorous place in the world to me when I heard the guys in Frank Holliday's poolroom talking about their travels," he wrote. "By the time I got there in 1930, it glittered even more. . . . Chicago then was all that they had said in the poolroom: the Loop, the cabarets, the biggest railroad center in the world, beaches …
Read more

The recently-launched James R. Thompson Center Historical Society made a unique entreaty to Chicagoans this week. The group --composed of an architect, real estate reporter and architectural historian in the city-- encouraged Chicagoans to "visit the building and contribute to the ongoing discussion of the past, present and future in Chicago," according to this story from the Sun-Times' Tina Sfondeles.

This reminded me of the recent Twitterverse suggestions about turning it into a hotel, which seemed like a feasible idea for this unique Helmut Jahn building.

Of course, doing so would bring the location back to its roots, since the legendary Hotel Sherman/Sherman House occupied this space in one way or another from 1837 to 1973.

The last iteration of the Hotel Sherman, designed by the ubiquitous Chicago architectural firm Holabird & Roche, opened in 1911, and at its peak had over 1,600 rooms. I'm sure you could squeeze in 1,600 rooms in a reconverted Thompson Cen…
Read more