He first performed in the city at the Savoy Ballroom in 1930 and made his last Chicago appearance at Mr. Kelly's in 1973. Between that time, his orchestra played in the city hundreds of times, at places like the Joseph Urban Room in the Congress Hotel, the Panther Room at the Hotel Sherman, the Regal Theatre, the State-Lake Theatre, the Hotel Stevens, the Oriental Theatre, the Holiday Ballroom, the Chicago Theatre and, of course, the Blue Note -- one of Ellington's favorite all-time performing venues.

"Chicago always sounded like the most glamorous place in the world to me when I heard the guys in Frank Holliday's poolroom talking about their travels," he wrote. "By the time I got there in 1930, it glittered even more. . . . Chicago then was all that they had said in the poolroom: the Loop, the cabarets, the biggest railroad center in the world, beaches that ran along Lake Michigan the full length of greater Chicago, city life, suburban life, luxurious neighborhoods -- and the apparently broken-down neighborhoods where there were more good times than any place in the city."

Ellington was a constant presence in the city when he performed here. So it's not surprising that he appeared at the Bud Billiken Parade --the nation's largest African-American parade -- numerous times over the years.

The wonderful photo above is from the Robert S. Abbott - John H. Sengstacke Family Papers in the Chicago Public Library's Vivian G. Harsh Research Collection of Afro-American History at the Woodson Regional Library.

CPL published this excellent gallery and story about the Billiken Parade, the seminal event long-sponsored by the Chicago Defender which is celebrating its 90th anniversary today on its traditional route from Pershing Road to Garfield Boulevard on the Chicago's South Side.

The library's caption dates the photo above to 1933. But that is wrong. Ellington was just arriving in New York City in late summer 1933, after his first-ever trip to Europe, where the band performed in an extremely successful tour which lasted over two months.

Instead, the photo above is from Aug. 18, 1934, according to Ellington's exhaustive itinerary published online by Ducal scholars.  Duke and the band would perform the next evening on the NBC Network in a national broadcast from the Merchandise Mart.

It wasn't the first time the Ellington appeared in the parade. The band appeared at the Bud Billiken Parade while on an extensive Chicago and Midwestern theater tour in the summer of 1931. But according to broadcasting veteran Rich Samuels, the headliners in the parade that year, believe it or not, were Freeman Godsen and Charles Correll, the white actors who played the African-American characters, "Amos N' Andy".

Duke is also seen here signing autographs at the Bud Billiken Parade in another great photo below from the University of Chicago's Chicago Defender collection. This one is from 1959, when one of Ellington's greatest bands was being featured at one of their many Blue Note (3 N. Clark St. in Chicago) residencies. Love that blazer -- looks more like late 1960s wardrobe to me.

I only wish this photo were in color -- Duke was partial to blue, so that's a good guess for the primary hue of the jacket.

The Blue Note, where Duke played 17 times (he was there usually twice in a year for three-week residencies in the summer and during Christmas season), would close in the summer of 1960. Three First National Plaza sits on the space where the club (and the adjacent Clark Theatre) once stood. Its' best biography is still this 1989 Chicago Reader piece from Dan Caine.

We're still waiting to see if someone comes up with a relatively complete representation of the Defender photo archives. Let's hope that day comes soon. In the meantime, the Bud Billiken Parade is more popular than ever, with around 1.2 million people on the parade route today. 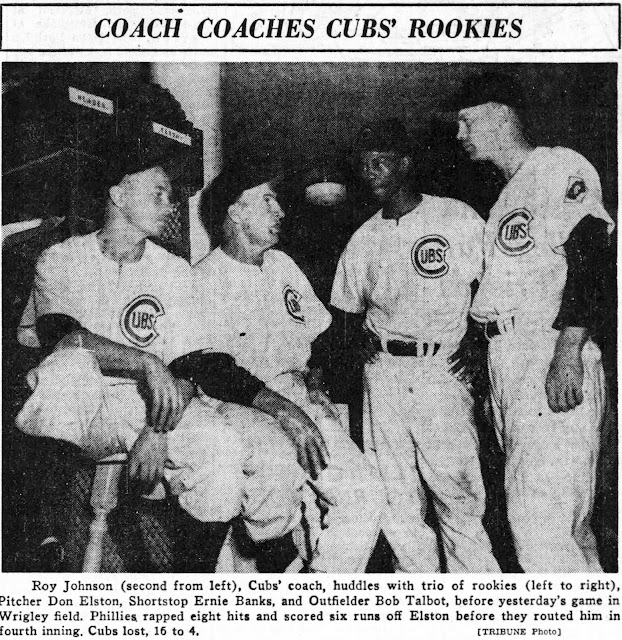 Hall of Fame shortstop/first baseman Ernie Banks made his Chicago Cubs debut on this date in 1953 at Wrigley Field. It was a historic appearance: the future "Mr. Cub" was the team's first African-American player to play for the Cubs, who were the eighth team in Major League Baseball to integrate with black players. By comparison, the crosstown White Sox were sixth, introducing Minnie Minoso and Sam Hairston in 1951. Banks was one of three rookies to make their debut on May 17, 1953. Pitcher Don Elston and outfielder Bob Talbot joined Ernie that day. A Chicago Tribune photographer captured the three before the game in the Wrigley Field locker room: Elston, who would have a decent 11-year career, mostly on the North Side, got hammered in his debut, as the Cubs lost to the Phils 16-4: The historic nature of Ernie's debut was totally lost on Ed Prell, the veteran Tribune sportswriter covering the event. Instead, he was dismissive of the 22-year-old shortsto
Read more